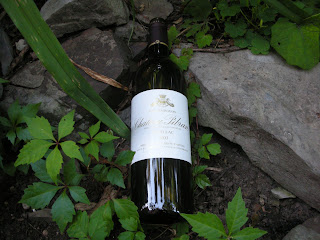 There are obvious dangers in discussing a particular vintage for any wine region - a variety of micro-climates, differences in harvest conditions and even different points of view on harvesting make generalizing about a vintage hazardous. However, I have tasted a number of 2003 Clarets (1,2,3,4,5,6,7,8) over the past few years (2003 was my first, and biggest, year participating in the futures game) and I think I can make a few broad comments on the vintage.

While the 2003 Bordeaux reds were trumpeted by some writers at the time, it has become a controversial vintage. I have read some commentary saying that the wines don't have the structure for aging, while other writers were concerned that the wines are too hard and will take many years to sort themselves out (if ever).

The first word that comes to my mind when I think about 2003 is 'accessibility' - most of the wines I have tasted are ready to drink today after a short decant. I am of the opinion that this is not a classic vintage and that these wines are not for aging - there has been a tendency to riper fruit, higher alcohol and low acidity. While some have said that the tannins in the '03s could be unripe, or even harsh, I am finding them soft and velvety for the most part (exception below) and in a blind tasting of Bordeaux I suspect some might think a few Californian wines were slipped into the mix. Given the riper, more accessible, less structured wines that have been produced in this vintage, I suspect 2003 will ultimately be viewed as a tragedy by the experts - a vintage for Claret lovers to forget.

Which brings up an interesting point - do all Clarets need to be 'cellar-worthy' to be enjoyed? Perhaps that is the joy of variable vintages - some vintages deliver wines of incredible depth, structure and aging potential, while others deliver every pleasures to pour while your treasures age? That is my view of 2003 - there were some great, but not classic, wines produced for oenophiles to savour while waiting for their 2000s to mature...

Here are some notes on three 2003s that are on my list of Top 50 Cellar Picks:

The 2003 Chateau Pibran (Pauillac) is a modestly priced Claret that I have been buying regularly since I first tasted the 2000 vintage. A gorgeous nose of violets and cloves, damp undergrowth, fresh ground pepper and ripe blackberries, tea and smoke. Crisp and spicy on the palate with chalky tannins, well-balanced but slightly dilute, it took some time to soften up in the decanter but opened up beautifully - Lloyd said it "screamed for a steak". Score: 17/20

The 2003 Croix-Mouton (Bordeaux Superieur) is an outlier to my comments above - very flinty, with strong liquorice and vegetal notes, also showing some leathery dark fruit, violets and damp undergrowth on the nose. Structured, with crisp, minerally and smokey fruit, but rather angular and needing air time to soften up. A classic Bordeaux that should flourish with a few years in the cellar. Score: 17/20

The 2003 Chateau Clarke (Listrac Médoc) was a modern-styled wine with a big nose of vanilla-y oak and leathery ripe blackberries, some pepper and flinty notes. While not as jammy as the nose suggested, it was round and luscious with peppery fruit and woodsy tannins. Easy drinking after a short decant but it got flabby quickly. Drink now. Score: 16.5/20
Posted by Joe at 12:19 PM

I don't have extensive exprience with the 2003's, but the ones I have had I've enjoyed quite a bit right now. Alternatively, the 2004's I've tasted are pretty closed right now. Here's hoping they expand a lot in several years since I have a bunch of 2004 second growths in my cellar!

Well done - I didn't participate in 2004 as heavily, only keeping one or two verticals going. I haven't touched any yet - I keep going back to '03 because they are so ready.