Our second tasting is probably most notable for the best wine:taster ratio of all time - the three of us opened six bottles of Shiraz and finished just about all of them! Extreme caution should be exercised before relying too much on these ratings...

Note that we did not keep as meticulous notes in those early days (even if we were capable of tasting notes that evening), so here is the ranking of the wines with some short comments:

Overall, it is amazing that we held a Shiraz tasting with six wines and only one Australian - clearly an oversight, and demands a retaste. The spread between first and second place was very small, requiring a drunken tiebraker. I have retasted both wines since then and they are fantastic. One observation I would make is that the French wines took much more time to 'open up', something I have noticed on many occasions. I suggest decanting all Bordeaux, Rhone, Madiran, Cahors, and bigger wines from the south of France. 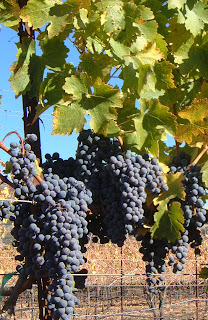 I helped start our wine tasting group not because I was "into wine", but because I knew nothing about wine. Between work and family I never had time to go to formal classes, so I invited a few guys over on a Friday night to chat and taste wines. We started with a price range of up to C$40 - my thinking was that this way we would taste wines that we would not normally drink everyday, and make sure the wines were 'representative' of their respective regions/grapes. The objective in all of our tastings was to go 'blind', removing any bias.

Having no real idea what we were up to, we cobbled together a group of willing tasters, downloaded a score sheet off the internet, and started with Cabernet Sauvignon, naturally.

My early tasting notes are less complete, but the wines (and rankings) were as follows:

First: 1999 Stanley Brothers Thoroughbred Cab. Sauv.
My ranking was in line with the group. According to my notes this wine had a beautiful spicy nose and was very deep, complex, balanced, fruity. Cost was close to C$25

Second: 1998 Santa Rita Casa Real
My second place ranking was in line with the group. The wine had a woodsy, berry nose, and was slightly acidic. I described the taste as "complex, with decent length, well balanced but perhaps a touch acidic". The tannins were very noticeable/powerful, and in retrospect probably not yet ready. Cost nearly C$55.

Others:
1999 La ferme d'Angludet
2001 Francis Ford Coppola Diamond Series Cabernet
From my notes it appears that the Coppola scored better. I described it as enjoyable, spicy, balanced, but could use some more depth. The Ferme d'Angludet was my first (and last) mistake buying the 'second' wine of a Bordeaux producer when I thought I was buying the first wine. Perhaps not a fatal mistake with "Alter Ego de Palmer" or "Carruades de Lafite", but D'Angludet's "ferme" is NOT a second wine to seek out - especially at C$35. This wine was well balanced, but a lightweight and uncomplex.

A couple of observations as I reflect on this tasting long after it took place: