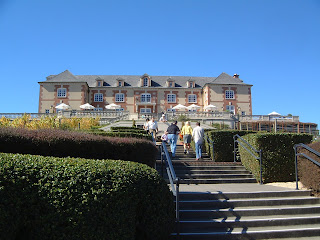 This was our group's second, but most rigorous, pinot noir tasting. We had a selection of top Burgundies and North American Pinot to contrast. Here are the results:

First: 2002 Domaine Carneros "The Famous Gate"
This wine placed garnered six first place and three second place scores from our ten tasters. I loved the earthy nose, with subtle scents of truffle, undergrowth and spices. This wine was delicate, but very well balanced, with potential for improvement. Chris says this cost him US$50 - a good deal (once you read about the wines below...). For those of you claiming victory for California over France, Domaine Carneros is owned by Tattinger...

Second: 1997 Calera Mills Vineyard
Lloyd’s Calera was the oldest of the bunch. This wine garnered four first place and two second place scores. According to my notes, this wine had a great nose and lots of interesting aromas (mint, prunes, oak, grapefruit, cloves) - to quote "smells like dessert"! The taste was only slightly disappointing vs. the smell for me. At C$70, I'd pick the wine above. (RP-90)

Third: 1999 Domaine Gros Frères et Soeurs Richebourg
While Cosme's wine did collect 3 second place scores, it still finished well behind the first two wines - especially disappointing given its price of 90 Euros. I scored the wine reasonably well. According to my notes, this wine was "nice, elegant, drink now". From my notes I can only assume that the complexity of this wine was below that of the first two wines.

Fourth: 2000 Louis Jadot Gevrey Chambertin "Lavaux St-Jacques"
My Burgundy did not show very well, despite the C$82 price, garnering only two second place scores. My notes were reasonably complimentary, describing the wine as "elegant" on both the nose and palate. Again, I think the complexity of the wine was not that of the first two. Ready to drink now.

Fifth: 2002 Thornhaven Barrel Reserve
Ok, who brought the Canadian wine? Pramod's Thornhaven had an interesting nose, but on the palate I described it as "boring, overextracted, no structure". Ouch. This was my last place, so to be fair I have to mention that a number of you liked this wine a lot better than I did. If your palates are more refined than mine, this could be the best value (C$27).

Sixth: 2000 Louis Jadot Gevrey Chambertin "Clos St-Jacques"
Brought by Cam, this was a big disappointment given the C$84 price - it was ranked last by most tasters. The nose was ok, very earthy, very subtle. On the palate I described it as very light, with good balance but uninteresting.

Editorial comments:
1) Considering the hefty prices of these wines, I was disappointed overall. Even if these were cheap I think I would have been disappointed. I have yet to have that magical "Pinot Noir moment" that turns me into a lifelong fan. I'll keep trying, but avoiding these should save me some money in the short run.
2) Despite the "Sideways" impact on Pinot prices, California pinots are good values (relative to Burgundy).
3) Cam should never let me help him pick out wine.
Posted by Joe at 9:40 PM 2 comments: