The Opimian Society hosted a tasting and dinner. This blinded tasting was meant to highlight the value of Chilean Reservas and Gran Reservas versus more expensive Napa wines. There were four Chilean wines and one Napa wine:

I generally agree that Chilean wines can compete with pricier American wines, and my cellar is very underweight California and overweight South America for that reason. However, I don't think the choice of wines this evening succeeded in highlighting Chilean value.

From my perspective, the Steltzer was the only notable wine. A beautiful nose of vanilla/caramel, with hints of blackberries and blueberries. On the palate the wine was medium to full-bodied, with nice, silky tannins and tasting of black cherries. Ready to drink now, but could improve slightly. This is a regular Opimian offering, and I just ordered the recent vintage at an attractive price of C$28-ish.

Looking at the Chileans, only the 2001 Cornellana Cab/Merlot came even close to the Steltzner, and coincidentally had a price tag close to the Steltzner. This was a well balanced wine, but uncomplex with a medium body and short finish. My next favourite was the Laura Hartwig, which I guess could be the value winner - decent nose, slightly rustic, medium to light bodied and "drinkable". That being said, I am certain I have had similar priced California wines that were equal to this one. Of the other two wines, the Merlot was quaffable while the 1999 Cornellana was well beyond its prime (perhaps a storage issue?).

Overall, the entry-level Steltzner was an impressive wine. This is not a winery that gets a lot of attention from the critics, so I am glad that Opimian highlighted them for me. I will try to visit this winery when I visit Napa.
Posted by Joe at 11:29 AM No comments:

It has now been a year since our wine group began, and the purpose of this evening was to retaste all of the winners from our thematic tastings head to head. While the scoring was more subjective this evening (it was meant to be fun!), most of our tasters agreed that the Spanish wines were the big winners.

From our conversations that night, it appears that the 2002 Castello Banfi 'Colvecchio' (Tuscany, Shiraz) came in third place.

The 1999 Delas Freres Crozes-Hermitage (France, Syrah) seemed quite backward at first, but ratings improved as the wine opened up much later. There was also a lot of interest in the 1999 Stanley Bros. 'Thoroughbred' (Aussie, Cabernet Sauvignon). A tie?

Despite the strong showing of the 1999 Louis Jadot Santenay 'Clos de Malte' (France, Pinot Noir) at our tasting earlier this year, this was the least preferred of the evening. Perhaps an elegant Pinot is overwhelmed in the company of such powerful wines? Perhaps the bottle was slightly off? Who knows – there are no bottles available anywhere for a retaste.
Posted by Joe at 12:14 AM No comments: 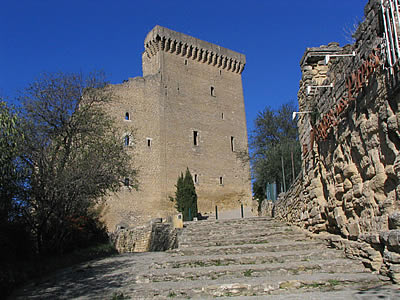 I took over our first CdP tasting, choosing all four wines. While my friends would say it was because I'm an obsessive wine geek, I really had two objectives: (1) to save some time for the less vinously endowed (i.e. cellar-less) individuals in the group, and (2) to compare wines from the same vintage (i.e. to let the producer, rather than the vintage, show through).

These were from the 1999 CdP vintage - a good vintage sandwiched between the 'extraordinary' 1998 and 2000 CdP vintages. The wines were terrific - here are the notes:

First Place: 1999 Domaine du Vieux Telegraphe 'La Crau'
This was everyone else's favourite by a wide margin. I was the lone dissenter on this wine - while my scores for the four wines were close, this was my least favourite. I described the nose as very smooth, with hints of berries, flowers and nuts. The taste was tannic and uncomplex, with a medium body and medium lenghth. To sum it up: "Easy, tannic, but nothing special". 'Nuff said. However, I would be remiss if I did not tell you this was the relative bargain - at C$39 it was the second cheapest CdP of the night. (RP-88)

Second Place: 1999 Mas de Boislauzon
I seem to be going in reverse order vs. my peers! This was my 2nd least favourite. I described the nose as bold, smooth, with blueberries and chocolate. The taste was elegant but uncomplex, with a medium body and medium to long finish. From my notes: "Very enjoyable, but not very special". This was another relative bargain at C$34 - the cheapest of the night. (RP-88)

Third Place: 1999 Bosquet des Papes "Cuvee Chantemerle"
Now to the good stuff! This was my favourite. I described the nose as "oakier", with scents of apples, leather and mushrooms. On the palate the wine was "very well balanced", with a medium body and medium to long finish. Yum. This was pricey - C$65. (RP-91)

Fourth Place: 1999 Chateau de la Gardine "Cuvee des Generations"
This cost an arm and a leg, and was supposed to be my 'ringer'. My peers were less positive on this wine, but it was my 2nd favourite. A very complex and "earthy" nose, with scents of blueberries, currants, vanilla, caramel and licorice. It was a bit disappointing on the palate (after that wonderful nose!) - I found the wine to be 'hot' (i.e. high, obtrusive alcohol), oaky, and a little less balanced (than the others) . Full bodied, with a long finish. A great wine, but not a great find at this price - C$94. (RP 90-93)

You get what you pay for? While I gravitated to the more expensive wines, the ratings as a whole did not follow price. This concurs with other CdPs tastings - great CdP can be had for reasonable prices.

Of our early tastings, this was easily the most memorable. First, the prices started to creep upward vs. our previous tastings. Second, I think all of us did more homework to choose the wines. Third, you get a lot more wine for your money in Spain. The combination of these factors let to a spectacular night, and some wines that I buy over and over again. There were only three wines tasted, and all were from the same modest 1999 vintage.

First Place: (tie between the next two)
1999 San Vicente Crianza (Rioja)
Cosme's San Vicente had a powerful nose - citrus, vanilla, oak. On the palate it tasted of chocolate and coffee, it was earthy and very well balanced. Medium to full bodied, with a medium length and nice finish. According to my notes, this would probably be a better wine with food - a big, fat steak. Permanent part of my cellar,~C$55. (RP-92)
1999 Hacienda Monasterio Crianza (Ribera del Duero)
I cheated a bit with my Hacienda Monasterio - only 70% Tempranillo, with the balance Cabernet Sauvignon and Merlot. It had a much deeper purple colour, with beautiful scents of oak, vanilla, flowers, rum and "yummy chocolate". The taste was complex, well balanced, with tastes of dark fruit, earthy, tannic, spice and leather. It was full-bodied with a medium length and a very nice finish. "Bold, fruity, silky". My cellar is full of this stuff. Approx. C$38. (RP-92)

Third Place: 1999 Artadi 'Vinas de Gain' (Rioja)
I believe this wine had gone bad. Unfortunate, as this had a good Parker rating (90) and was reasonably priced. On the nose there were interesting smells, but the taste was awful. I will retry this if I ever find it again.

Summary: Do your homework and seek out some Spanish wines. The gems come at terrific prices.
Posted by Joe at 12:12 AM 2 comments:

Our first Brunello tasting required some changes to our usual tasting format. Obviously, it was not possible to stick with our C$40-ish objective and taste Brunello. With the hefty cost for decent Brunellos, the four tasters split the cost of the three wines. While this removed the 'competitive edge' of our tastings, it focused the group on comparing and contrasting some top Brunellos. To further control this experiment I bought three Brunellos from the same vintage. While 1998 was not a top vintage, this was perhaps a better strategy for separating the better winemakers from the pretenders.

The price range was dramatic, and the four of us had a good time with this. Unfortunately, I was not feeling well that day (stomach thing) and my nose was partially stuffed up. As result, my notes may not be fully reflective of the group, and I didn't enjoy it as much as I could have ... sigh.

First Place: 1998 Gaja 'Sugarille'
This was one of the most expensive Brunellos available at my shop. Not surprisingly, this wine was great, classy. This wine had a spectacular nose, with scents of vanilla, caramel, cherries - "beautiful, elegant". Given the price (C$157) and pedigree (Gaja), this was the crowd favourite by a WIDE margin. At that price I would never buy it, but I would love it if someone else bought it for me.

Second Place: 1998 Altesino Montsoli
Altesino is supposed to be an excellent Brunello house, and the single vineyard Montsoli is their premium wine. The wine displayed delicate floral aromas, with some cherry scents. On the palate it was spicy, oaky, with some acidity and light fruit, medium/light-bodied and medium in length. I was out of consensus, as I didn't like this one as much as the regular Altesino below. C$110.

Third Place: 1998 Altesino
I thought this had a beautiful nose - delicate scents of chocolate, fruit, spice, oaky, nearly perfect. On the palate this also tasted of chocolate, oak and spice, but was a little off balance with high acidity and little fruit, medium bodied but with a longer finish than the Montsoli above. C$62 Moving on to Pinot Noir. Our first Pinot tasting featured a variety of wines spanning the globe - three Burgundies, a Canadian wine and an Oregonian wine. As you can see below, this was the most divided panel to date - three wines tied for first place.

Probably the biggest surprise of the evening was the strong showing for the Canadian Pinot Noir in a group of highly regarded wines. I put this in as a filler - I thought my Oregon wine would win...In summary, the contest concluded as follows:

Overall, my personal favourite was the Jadot "Clos de Malte", and the Leflaive Santenay was also very nice (and a better value), in my opinion, but obviously not as interesting for my peers.
Posted by Joe at 2:32 PM No comments: