A Bevy of Great Wines at À L'Os 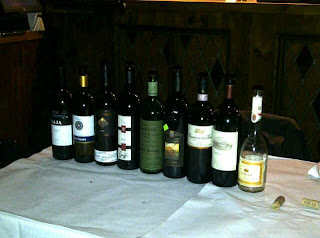 Our tasting group got spring off to a great start, raiding our cellars for some great stuff to pair with MY favourite Montreal BYO, À L'Os.

Waiting for the entire crowd to arrive, Mark and I served up some 2007 Pio Cesare Langhe "Oltre" to whet our palates (a surprisingly fruity and accessible Piedmont blend from a terrific winemaker).

Ahh, so many wines tonight so we went with three flights - two Brunellos, then two Bolgheris, then two Nebbiolos...

It was nearly impossible to choose a favourite between Mark's 2000 Casanova di Neri Tenuta Nuova and my 1999 Banfi Poggio all'Oro Riserva. The Casanova di Neri was compote and cedar, with spicy liquorice and flint on the nose - very dry and more awkward on the palate than the Poggio all'Oro, but surreal evolution over the evening - very, very complex and could be a stunner in a few more years... Score: 18+/20. The Poggio all'Oro sported a more 'classic' nose - flint, cherries and chocolate, old leather and dried tobacco leaves - gorgeous, soft velvety tannins and a very, very long tobacco finish, impeccable balance, Score: 18+/20

After those two gems I was worried that the Bolgheris might disappoint, but then I spotted the Ornellaia label (and there was much rejoicing). Pramod's 1999 Ornellaia met my lofty expectations - aromas of green pepper, violets and blackberry, with a dash of oregano, grenadine, meaty white pepper. Minerally and reserved on the palate, beautiful balance and a long, silky finish Score: 18/20. Where Ornellaia sticks to the Bordeaux plot line, Lloyd's 2000 Enrico Santini Montepergoli had a different take on Bolgheri - Merlot, Cab. Sauv, Syrah and Sangiovese. A beautiful nose, with distinctive musty and mushroomy notes, some mint and basil. Bold, crisp cherries with silky tannins holding it together for a decent finish, very drinkable today Score 17.5/20.

The third flight, nebbiolo, was the heaviest - just as palate fatigue was beginning to set in. But a Conteissa?! I must be in heaven... Cam's 2007 La Spinetta Monferrato Rosso "Pin" gave up notes of roses, tar and white cherries. Very crisp, dry, and lengthy, but less polished than the other wines tonight (it was also the youngest), it should soften up with some more time in the cellar Score: 16.5/20. Chris' 1999 Gaja "la Conteissa" was the highlight of this tasting for me...cola, or maybe a Dr. Pepper smell, with fresh cherries and ink. Pretty, complex, with soft silky cherries dancing across the palate - incredibly lengthy but not overbearing, and so super polished (I wouldn't expect less from Gaja) Score 18.5/20.

After so many great wines we should have been finished, but Lloyd had a Quintarelli waiting in the wings. WOW. The 1999 Quintarelli Valpolicella was hot, with a nose of almondy liquer and ripe, raisin fruit, some woodsy and peppery notes. Despite the hot raisins up front, this was a polished offering.

OK, so Chris had a Tokaji for dessert but I'm done writing notes...look at the bottle, it tasted good.