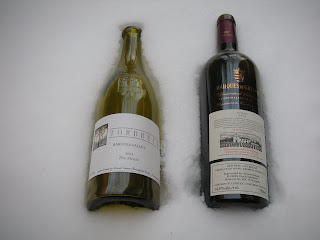 My good friend Ash, a founding member of our tasting group, stopped by on a Friday night for some wine and conversation. I had a Bordeaux standing up in the cellar for this occasion, but Ash arrived with Spanish Syrah, forcing a last minute change in plans...

When I wrote my post on palate drift a few weeks ago it was Aussie Shiraz that was most on my mind, so I opened this 2004 Torbreck "The Struie" with some trepidation. Very aromatic, it grabbed my nose and smacked me over the head with gobs of smokey toasty oak, blackberry, and violet...later unveiling notes of liquorice, cinnamon and wet coffee grounds. "Oh crap, not again, soft and jammy" I thought, but not this time. A tremendous palate full of contradiction: brawny yet elegant, robust and flavourful yet fine, luxurious velvety tannins but not definitely not 'soft' - all a prelude to an incredibly long finish. Drink after a decant today, but I recommend more time in the cellar. Yes, this blew away my expectations, but I remain disappointed - so close to perfect if Torbreck would just tone down that oak ...
cork. 14.5% alcohol
Score: 18/20
Price: C$52 (SAQ)

Ash pulled out a surprise for me, spoiling me with a Spanish Syrah that I had meaning to buy. You see, this wine is made by the same winery that provided a rather intriguing single varietal Petit Verdot for last year's "Oddities Tasting". The 2003 Marqués de Griñón Syrah had an equally interesting, but more subdued, primal nose - meaty and pruney notes mingle with liquorice and black pepper, some rubber and ripe black cherries arrive later in the evening. The palate was crisp, gripping, and a touch more awkward, the tannins softened to velvet over the evening. An incredibly long finish, this wine needs time...
cork. 14.5% alcohol
Score: 17/20
Price: C$37.25 (SAQ)
Posted by Joe at 5:49 PM

Joe...you almost got me trying a bottle..€ 45,--here...but methinks still too much 'Aussie fruit'..you know what I mean....maybe I'll wait until Mr Torbreck has read your notes...and toned it down.

However..as with many New World wines..the top of the range is nearer to our style....
What intrigues me..is how our buddy Edward is always drinking wines with 93-94(that's 17-18 points in English).
Does he keep all the good wines..or..are our palates different(that's the serious part of this post)

Hi Barry, I was impressed with that Torbreck, better than some more expensive Cote-Roties I have had of late. I think you are right about many top New World wines - they are more reserved and carefully crafted. I cannot speak for Ed, but I think he is a lot like me - at peace with the new world but a lover of old world wines as well, perhaps trending even more so. Ed?

This is something I think about often. Even more so the last few days, as one of my brother in laws is over from at the moment and I have been trying to trick him with Aussie wines. . .

He drinks mainly euro wines and feels that Aussie wines are easy to pick. . . After several days of trying with wines I feel are less clearly Aussie, I think there is more than a grain of truth in his thoughts. The aussies have more fruit and brightness.

Surprisingly I think one area of commonality is young pinot noir from Victoria and young burgundy. The gap has narrowed.

I suspect our palates are all different, but I'm sure we could agree on what was a great wine and I'm sure I could find something in each of your cellars that I would love and enjoy!

Hi Ed - glad to see we both have New World/Old World insomnia. I have also put Aussie wines that I thought were old world in style blind vs. old world and they still tend to stand out, but less so than the more classic Aussie offerings. No matter - if there is wine in the glass I am ready to drink, and I think all of our palates can agree on that.