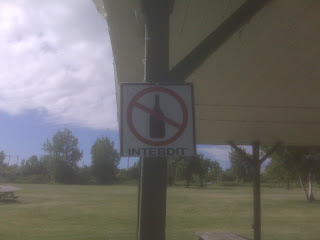 Saw this at a park in Montreal - am I reading this right? And why pick on wine - haven't they heard the news about resveratrol?
Posted by Joe at 10:15 PM 4 comments:

Well, you wouldn't know it by the weather, but Spring is rapidly fading into Summer and the white wines are flying out of my cellar. Not true, actually - tonight's wine never made it into the JoeCave...

My simple view of Canadian (Niagara) wine is that Germanic/Alsatian/Burgundian varietals work, Cabernet, Merlot and Syrah do not. It is not a well informed view, as I rarely partake in the hometown hooch, but every additional tasting of Niagara's wares seems to further entrench this view.

With that in mind I was positively predisposed to the 2006 Henry of Pelham Reserve Riesling (Short Hills Bench) that arrived as a gift from our good friends, Peter and Tara. Stoney minerality, bitter lime rinds, and white flowers on the nose, accented by damp hay and some green melon...very nicely done! Simple, fresh, citrussy, minerally, a Riesling to make a Canuck proud.
screw top. 12% alcohol
Score: 16.5/20
Cost: gift
Posted by Joe at 11:27 PM 2 comments:

After such a nice experience with Cono Sur's "Visión" Pinot Noir I have been looking for an excuse to try the rest of the Visión lineup. That excuse came while on a shopping run for whites, and it had been a while since I have opened a Viognier....

The 2008 Cono Sur Visión Viognier was like spring cleaning, all floral and soapy, clearing out the red wine cobwebs gathered over a long Montreal winter. Peachy notes and some wet stones as well, a prelude to a flavourful white wine...bitter and tangy with nice minerality and a soft, luxurious mouthfeel...one of the nicest new world Viogniers I have ever tasted (and the bottle disappeared very quickly!).
screw top. 13.5% alcohol
Score: 16.5/20
Price: C$18.65 (SAQ)
Posted by Joe at 11:26 PM No comments:

The Hôtel Le St-James is a famous Montreal landmark, a boutique hotel in Montreal's increasingly trendy old port, and tonight's business dinner gave me a chance to try their rather posh restaurant, XO.

Our first wine was the 2005 Lucien Muzard et Fils Santenay Gravières. I had tasted the 2004 version recently and speculated that the 2005 would be bigger, fleshier...nope. Fresh strawberries, old leather, slate and hints of cola, but a bit too smokey (too much oak) on the nose. Crisp, fresh berries and stark minerality - tight and less fleshy than most 2005s. Angular at first, but softening nicely over the evening...my style of Burgundy. Score: 16.5/20

Our next wine was a Zickefoose Cabernet Sauvignon from Sonoma. This special order, recommended by the sommelier, is not on the current wine list so the vintage details (2004 or 2005) are lost forever. Nice green pepper and vegetal notes, some minty cocoa and blackberries as well. Fleshy blackberry on the palate, it was fresh and lively yet silky smooth and incredibly well balanced at the same time. A modest finish, drink now. Score: 17/20

I was not picking wines tonight, just nudging my buddy Lloyd along, but the wines and the pairings were spectacular. I didn't take any notes on the food, but the food was of very high quality and the service and ambience at XO were excellent.

Uber IGTs: A Tour of Italy's Most Expensive "Table Wine"

Eden's night of Tuscan wines was a prelude to a show-stopping, Uber-Tuscan night of over-the-top wines: Masseto, Sassicaia, Ornellaia....

Yes, our first IGT (Italian "table wines") night delivered an impressive slate of wines (even if the best wines were not IGT...) but what I really liked about this evening was the narrow score distribution - I think the group would agree that this may have been the narrowest distribution of scores in one of our grand tastings, which led to lots of debate and no consistency in the rank orders. But out of this disorder I managed to glean the following notes:

Well, it wasn't even close - with four first place and two second place rankings Cosme's 2001 Ornellaia (65% Cab Sauv, 30% Merlot, Cab Franc) was the clear winner. But wait, it's not an IGT? No one complained, as this 'Bolgheri DOC Superiore' wowed with an beautiful and exquisitely complex nose - clearly Bordeaux-like, with spicy oak and dark fruit, layers and layers of aromas...violets and roses, sour cherries and white pepper, leather and cloves with some underlying green pepper and vegetal notes. Soft and silky on the palate, very easy to enjoy today but I felt it was touch flabbier and unstructured vs. the others, and that became more evident as the evening progressed. Score: 18/20

Cosme took the silver as well, bringing a 1999 Sassicaia (85% Cab Sauv, Cab Franc) that ranked close behind the Ornellaia, but got there very differently. Another Bolgheri (didn't somebody tell him it was IGT night?), I did NOT like the way this one started out from the decanter - a heavy dose of sulphury oak at first sniff, it took a while to blow off and reveal some sour cherries, old leather, later some green pepper and notes of cheese rind. Powerfully built, pounding the palate with dense tannins and a finish that lasted all night. All power and no finesse today, but this is still in its youth and I predict great things when this bottle finally sorts itself out. Score: 18.5/20

We had a tie for third place, so I will start with what was probably the greatest value of the night. Cam's 2000 Ghiaie della Furba (Sangiovese, Merlot, Syrah), at C$41, was half the price of the next cheapest wine, yet was probably the softest, silkiest, and best balanced of the night, a combination of great winemaking and optimal bottle age coming together perfectly. Less complex than the others, and all ready peaking, but at this price? Score: 18.5/20 (one of my Top Cellar Picks)

Pramod's 2000 Flaccianello was deceptively good, and I wonder if another few hours in the decanter would have put it in first place instead of third. Classic Sangiovese tobacco notes mingled with sour cherries and spearmint, liquorice and black pepper, some vegetal notes. Tangy and spicy with an incredibly long finish, I am so glad I have a cellar full of this stuff. Score: 18/20

Lloyd brought a legendeary wine from a less than than legendary vintage, the 2002 Masseto. Fashioned from 100% Merlot, it delivered a nose of violets, ripe strawberry compote, and some smokey vanilla. Crisp and full-bodied, but not overbearing, with velvety tannins and a flavourful, long finish. I expected from one of the worlds most expensive merlot bottlings to be kinder, gentler...but the score kept creeping up over the evening. Score: 18/20

My 2000 Serpico, made from the Aglianico grape, was easy to spot - clearly not Cabernet or Sangiovese, but my "nekulturny" friends did not like this so you can take my notes with a grain of salt. To be fair the nose was simple - flinty prunes and some floral notes - but luxurious, tangy tannins and a very long finish made this a joy for me. Maybe I won't share my Aglianico any more...Score 18/20

Many thanks to Pramod and Sofia, perfectly setting up these wines with a spread fit for kings (including a rather tasty, but ominously named fatty meat called "lardo"), and to the gang for really digging deep into the cellar for a creative flight of wine. 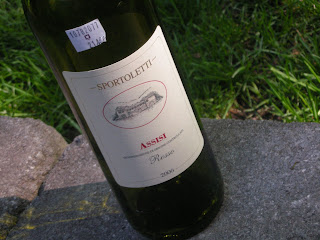 The appellation of Assisi is obscure - no entry in the Oxford Companion to Wine, a mere village name in another book, even my Vino Italiano book simply mentions DOC rules - Sangiovese 50-70%, Merlot 10-30%, other varietals up to 40% max. But it resides in the Umbrian wine region, so the grape varietals and winemaking styles are familiar...

Tonight's 2006 Sportoletti Assisi Rosso was undeniably Tuscan-sangiovese in style, perhaps from a hot vintage. Very tobacco and dark blackberry on the nose, a bit hot and jammy, some cedar, liquorice, hints of violet and vanilla. Very dry, smooth and well balanced on the palate - delicious, but less structured (low acid, lots of fruit) than I hope for in a sangiovese.
cork. 14.5% alcohol
Score: 16/20
Price: C$21.40 (SAQ)
Posted by Joe at 10:05 PM No comments:

The 2005 vintage for red Burgundy has been widely praised in the wine media, a rare vintage which seemed to get the nod from both the traditionalists and the modernists. I have also enjoyed a number of these wines, but with many of these beauties long gone I was not expecting an email from my friend, Mark, offering me a chance to partake in a special '05 Burgundy order.

Not a house that I had heard of before, but the importer taunted us with some glowing reviews (but of course!) of these two bottles:

These were no-fault wines - it would be really easy to serve these and win kudos - but perhaps lacking the depth and complexity of the greats. Stylistically I preferred the more tightly wound Volnay, but the fleshier Beaune was equally pleasing - that was simply a style preference.

Conclusion? Even some of the '05 holdbacks are worthy additions to the cellar - buy em when you see em
Posted by Joe at 9:37 PM No comments:

Super Tuscans in the Garden of Eden

My buddy Eden loves to make a big to do of my visits to Toronto, this time inviting a bunch of friends over for steaks and a tasting hosted by yours truly. Personally, I love to mess with the gang and put together an eclectic flight of wines, but tonight I decided to see what 20-50 bucks could get you in Tuscany, and (blinded) I was curious if we could identify any "hidden gems".

I was curious to see how the 2005 Nipozzana Reserva (Chianti Ruffina) would show in this flight, being the lowest priced of the bunch. A bit jammy on the nose, with tobacco, and slatey black cherry, a minerally finish but a touch fruity vs. prior vintages - a great value (C$22), but it didn't blow the competition away. Score: 17/20

There was no doubt in my mind that the 2006 Lucente (IGT) stood out from the pack - notes of mint, ginger ale, anise and flint...incredibly smooth and polished on the palate, with fresh cherries and a deceptively long finish (C$40). Score: 18/20

The 2002 Piastraia was a gorgeous wine...wet stones and black cherries, leather and tobacco, a most gorgeous mouthfeel, with fine, silky tannins...balanced, with a pleasing, lingering finish (C$40). Score: 17.5/20

But it wasn't all Italian, as Mike brought a treasure from his own cellar, a well-aged 1996 Caymus. A beautiful nose of figs and black earth, piney and cedary leather, sulphur, showing hints of violets, plums and blackberries as it opened up. Pruney, light and peppery, tangy and lighter-bodied. Stylistically my ideal claret, and it has aged very well, but just a touch awkward despite substantial time in the decanter - excellent, but just shy of outstanding.
Score: 17.5/20

Overall, buyers should note that two 2005 Tuscans that have been favourites of mine produced modest disappointments, and will certainly guide my future Tuscan wine buying...

Thanks to Eden and his wife for the terrific spread to complement this tasting - the steaks and all the fixin's were delicious. I look forward to another meeting of my Toronto tasting group!
Posted by Joe at 10:01 PM 3 comments: