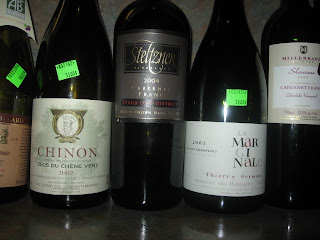 Marcus was the first wine blogger to notice my site and his encouragement has been inspiring. But Marcus has always been suspicious of my patriotism - there are very few Canadian wines on this site. His great experience with a Niagara Cab Franc and my lack of enthusiasm for the hometown juice led to a truly awesome global Cab Franc showdown last night:

My contribution was the Marginale and the Steltzner, a wine tasted here nearly a year ago, and acquired on my Napa 2006 tour. The four wines were decanted (exc. the Hillebrand), served blind, and enjoyed over the evening with some tremendous food.

On my left was the 2002 Clos du Chene Vert, a classically-styled Loire Valley cab franc from the Chinon appellation. A pale cherry red, the first aroma was that of cheese - brie, perhaps - later developing nice complexity, showing violet, rose, strawberry, nutmeg, pepper, bread and undergrowth. On the palate it was peppery, oaky and even olivey. A very lengthy finish, this needs more time in the cellar. To quote my notes, "beautiful". Joguet is clearly a winemaker to watch - I loved the Dioterie, and last night's Chêne Vert was equally impressive.
cork. 12.5% alcohol
Score: 17.5/20
Price: C$33 (SAQ)

Next was the 2004 Steltzner Cab Franc. Following my recent trip to Sonoma (and a visit to Napa last year), it was not problem identifiying this as the American wine. A deep, dense cherry red in the glass, it showed nice jammy blackberry fruit, with some liquorice, smoke, tobacco and cocoa. Medium to full bodied, the velvety tannins provided structure to the nice, big, dense, chewy fruit, but it got a bit flabby later in the evening. Note that this wine hid the 15% alcohol very well. Might improve with time, but a very nice new world cab franc today.
cork. 15% alcohol
Score: 17/20
Price: ~US$38 (winery)

Third from the left was the 2003 Domaine des Roches Neuves "La Marginale" was an enigma at first, showing some more modern styled winemakeing, but obviously old world on the palate. Woodsy, dusty and oaky at first, it later showed nice blackberry, pepper, black liquorice and undergrowth. On the palate the thick tannic blanket of dry dustry tannins coated the tongue with nice, crisp, leathery fruit - very complex, very interesting. A very long finish, this wine was way too young and should improve with some cellar time.
cork. 13% alcohol
Score: 18/20
Price: $38 (SAQ)

On my right was the 2000 Hillebrand Showcase Cabernet Franc. Aging beautifully, this wine was smooth, but rather one-dimensional in the presence of the other wines. Meaty, with violet, blackberry, leafy green pepper, and liquorice, it was simpler than the other wines. It was also simpler and thinner on the palate, but with nice blackberry flavour and silky smooth.
cork. 12.5% alcohol
Score: 17/20
Price: C$50 (winery)

Overall, a very awesome tasting and my first with a fellow blogger. What did I learn last night?

1) Marcus is a great host. Just make sure you get the tasting finished before he fires up the stove or you won't be able to smell the wine! (we did)
2) An eight year old Cab Franc from Niagara can taste very smooth and luxurious, and while "new world" it was not American - I thought they would be more similar.
3) I thought the Napa might better one or both of the Loires. Those Loires were amazing, and the two cheapest!
4) I thought that the Marginale was almost Bordeaux like - poised, yet powerful, rich but not cloying, focused but not too acidic. In that context - equal or better than many pricier Bordeaux - it is an absolute steal. The Chinon was equal, but a more classically-styled Loire red and maybe a slightly better match for dinner. In a blind tasting with some Bordeaux, I think the Chinon would have been easy to pick out, the Marginale less so.
5) Both of us correctly separated the old world cabs from the new, and both of us preferred the old world juice. Even more important, those two were amazing bottles and much cheaper - consumers take note!

By now, some of you have done the math and realized that two gentlemen opened four bottles of wine. We only finished half of the wine, so it could have been a more difficult morning...
Posted by Joe at 2:14 PM

Sounds like a good night to me! Though Cab Franc is not really my thing, we get a lot of it at the vineyards around here and I mostly find it thin and acidic.

Hi Sonadora - drinking with a fellow blogger is always a good night! That was my old impression of Cab Franc - perhaps true at the low end with some makers, but none of these were thin and acidic (but they were pricey...). I have never tasted a Virginia wine - of any grape...someday. Cheers!

For the record, the second thing I wrote down for the Niagara when blinded was "oxidized" thinking it was a bad bottle of something you brought!

(Suddenly I don't care how patriotic you are, how you grade it or how Niagara comes off to your loyal readers -- I just want to be able to return it to the winery since it was purchased from them at the end of the summer!)

Perhaps a rematch is in order? I've ascertained the location of a bottle of the 98 Hillbrand Cab Franc Showcase which is still has years in it.

(A rematch would also be good because Joe is a fantastic wine enthusiast and I learn a lot for his dedication!)

Thanks again for sharing the bottles and your knowledge.

i'm a fan of thierry germain's wines in general, although they are more concentrated than most in Saumur. I love his entry level saumur champigny which you can get here for about $15, and the Marginale is lots of fun too with some bottle age. I still have a few 2000s lying around. There is a mid level wine called terre chaud that i think is a good value at about $20.

Apart from Les Picasses from Raffault and more Chene Vert, I went straight to the Thierry Germain stock when I did my shopping after this tasting. No Marginale is left in Quebec but I got the entry level 04 and the Terres Chaudes 05.

Glad to know you've pre-tasted them and approved Bguy -- the word is that they are definitely not Saumur-typical, which could be good or could be bad. La Marginale 03 was great.

Hi Marcus. I guess your "oxidized" was just "flat" to me. If you think a 10 year old Canadian cab franc is up for a rematch then by all means - I have another Joguet and Germain for such an occasion! Thanks to you - my tasting group would never go for a cab franc tasting.
BKG: as I drank the Germain and Joguet, I was thinking less about extraction and more about vintage - the '03 just seemed to come from a superior vintage, with similar "style". Lo and behold, my RVF guide rates the '03 a 4 star vintage "de tres grands cabernets" - perhaps a same vintage Joguet vs. Germain would be in order? I sense "roadtrip"! The entry Germain (2005) is $18 here, tax in, will go pick some up. I have one more marginale, which I will put away for a few years as you suggest.

sounds like a fun tasting. I haven't had too much cab franc, there are some local wineries in New England that make it and I've been pretty underwhelmed. But you seem to have found some good ones.

It's fun getting help with the tasting; I hosted a Spanish wine tasting last month that was a good time.

Hi David. Yes, it was great fun - nice to finally meet a fellow blogger. Well, it helps to have cab franc from an established wine regions. Love the spanish wines - will drop by and have a look. Cheers!