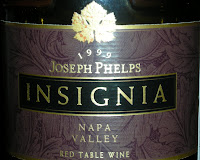 It is nice to have good friends, and it is even nicer to have good friends who make surprise visits with very nice wines! So it was a late Saturday evening when a (SUPER TERRIFIC EXTRA SPECTACULAR) friend decided to drop by and share a bottle of the legendary Joseph Phelps Insignia.

The 1999 Joseph Phelps Insignia is one of Napa's most famous wines, and comes with a 'famous' price tag. I rarely get an opportunity to taste a wine of such pedigree, so I was thrilled to have the opportunity. Despite a few years under its belt, the 1999 still had an attractive deep purple colour. Tannic on the nose, with nice minty/vanilla scents, followed by leather, spice, oak, butter? , and some green pepper. The wine went through a major transformation in the decanter, later delivering scents of chocolate and coffee. Well balanced, rich, and voluptious, the nose was deceiving - I thought the tannins would be more powerful, but they have softened up to deliver a very drinkable wine.

Overall a terrific wine, although I expected more persistency and a longer finish after that wonderful nose. Perhaps difficult to pair with a meal, this is a special wine for drinking now - late at night with a cheese platter?
14% alcohol
Score: 17.5 to 18/20
Cost: I can't afford it
Posted by Joe at 7:58 PM