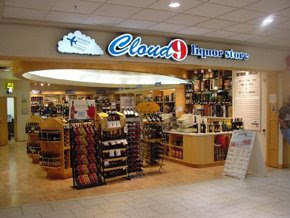 A recent business flight routed me through Calgary, where I noticed that the Cloud 9 Liquor & Wine Store has reopened. Now there is nothing novel about a Duty Free shop in an Airport, but Cloud 9 is not a Duty Free shop - it is a shop for Canadians to engage in a little "inter-provincial tax arbitrage".

You see Alberta is Canada's oil province, and its lower taxes (and no government-run liquor monopoly) are evident in lower wine and spirits prices, for the most part. Calgarians laugh at me, saying Cloud 9 is way more expensive than other local shops, but they miss the point - with prices for many products up to 20% lower than those at home, out-of-province travelers don't have time to drive around town for an extra 5%.

Cloud 9 used to exist just behind the check in (but before security) and proudly advertised its prices vs. those for BC Liquors and LCBO. But then the 2006 terrorist plot ended air travelers' ability to carry-on wine (which really pissed me off) and Cloud 9 closed.

Now I haven't been to Calgary in a long time, so I don't know when it reopened, but it has reopend behind security. That's right - check your bags, clear security, pick up a Starbucks and do a little liquor shopping. And since you are past security you can carry it onto the plane.

Does Cloud 9 have a dizzying array of wine? No, but it is pretty good. Is it always cheaper than SAQ or LCBO? No, not always. But there are many deals to be had (especially single-malt scotch).

I couldn't pick up a bottle this time as I was on an outbound flight with a short connection, but I do recommend that out-of-province travelers waiting for a flight in Calgary stop by and pick up a bargain.

Cool, good to know. Not sure I'll be flying through Calgary anytime soon, though!

Hi Shea, I always thought this was for the BC Commuter crowd more than anybody else. You won't be there now, but you'll be back in BC someday, right? Business has me going to Edmonton quite frequently over the next few months, may have to route myself through here on the return.

True enough, maybe if oil prices turn around I'll have some big oil clients to deal with. Let's hope so!

I have listened enough about this wine store but never go before. I would like to go this weekend to visit the wine store and wine collection

Hi Rebecca - I will be honest, it is intriguing mainly because you can buy a bottle and carry it on the plane with you. It is also intriguing becase there is a selection of BC wine that we don't get out east. But you have to watch the prices - often the tax differential matters, but sometimes the cost of operating in an airport is too great. Cheers!

On June 7 2012, my daughter was in this shop & purchased a bottle of Road 13 Rockpile for $32.99. She asked the clerk if this was the same price as in BC liquor stores. The clerk said yes, maybe cheaper because of no PST in Alberta. The price in BC is $24.99 including HST.