A World of Great Whites 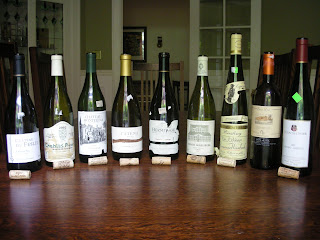 For my tasting group this was our first evening dedicated to white wines. With such limited experience at the higher end of the white wine market, we decided to taste a variety of whites from around the world in a more casual, unblinded format, so our tasters put away their score sheets and simply enjoyed. (Except for me)

Waiting for the guests to arrive, we sipped on a bottle of 2004 Chateau des Fesles Chenin Sec "La Chapelle" (tasted here previously), the designated "warm-up" wine. Nice for a start, but not up to the main event!

We tasted the following six wines in flights of two, in the order below:

Pramod's Caves Duplessis Chablis was very subtle - you had to work hard to find the aromas in this wine. First described by the group as "stinky sock, but in a good way", it later (much later) revealed some subtle floral, apple, grapefruit, mushroom, cheese and lemon brioche. Very light bodied, and I would say thin and dilute, this was elegant, but the opposite of what I look for in a Chablis - no crisp acidity, no chalky minerals - the crowd response ranged from "ho-hum" to "yech". 12.5% alcohol
Score: 17/20
Price: C$40ish

My 2005 Montelena (not the 2004 reviewed recently) was less controversial. Fresh cut grass, honeysuckle, quince, grapefruit, undergrowth, and earthy on the nose, it smelled "green" and "young". Very well balanced and drier, crisper, and richer than the Chablis, with a nice (but not overpowering) dose of lemon and butter. A beautiful wine, but needs to rest a few years. 13.9% alcohol
Score: 18/20
Price: C$45 (SAQ)

Cam's Catena Alta had a most unusual nose, variously described as "fishy" or "it smells like the wharf". I noted fish, lemon, banana and olives - a very different nose from the other two chardonnays. Despite this freaky nose, it was one of the crowd favourites. I liked the juicy, crisp, buttery and balanced palate, but I did not think it was up to the other two chards. 13.5% alcohol
Score: 16.5/20
Price: C$47.50 (SAQ)

The Tardieu Laurent Hermitage had the most interesting nose. Very floral, white flowers, almost perfumey, but with a nice woodsy/earthiness. Velvety, extremely well balanced and very elegant on the palate, with a nice taste of peach and almonds. Another terrific wine, but the group was less enthusiastic. 13.5% alcohol
Score: 18/20
Price: C$67 (SAQ)

Ash's Schloss Gobelsburg smelled of buttery toast, pine, yeasty. Slightly effervescent and slightly less dry than the chardonnays above, I found it the most powerful and interesting, but a bit off balance. 13.5% alcohol
Score: 17.5/20
Price: C$36 (SAQ)

Overall, I think the Alsace Riesling was the star of the dry wines, while the Chablis was the least preferred, but I think every taster had a different favourite. Personally, I may buy a bottle of the Montelena to stash away in the cellar, and a bottle of the Alsace because I love them so. The Tardieu Laurent is tempting, but pricey. These wines paired to varying degrees with a selection of sashimi, cheeses and a baguette.

It was Chris' birthday, so for dessert we opened a 2002 Donnafugata "Ben Rye" (Passito di Pantelleria). This was the REAL star of the evening. Deep amber in colour, the nose revealed a stunning bouquet of canned peaches, apricots, caramel, hazelnuts and almonds. Luscious and very well balanced, this was a beautiful dessert wine - one of the best I have ever tasted. I have never seen a bottle of dessert wine disappear so quickly! I just bought four more half bottles. 14.5% alcohol
Score: 18.5/20
Price: C$70 (SAQ)

After all that, the stragglers finished a 2005 Selbach-Oster Riesling Kabinett, a wine recommended by my friend Bill Z. We were in no position to score or rank that wine, but I can safely say it disappeared rather quickly and I have fond memories of it.
Posted by Joe at 8:22 AM

Joe,
Was the 2005 Selbach-Oster Riesling Kabinett the 'fish label'?
I recently had the other Selbach 'fish label' Kabinett and found it to be a delicious but just middle of the road Kabinett.

But reading about bottle after bottle disappearing was bittersweet.

The Kabinett is the only one I've had here, i.e. cheapest... unfortunately I can't help with the fish label question. What's fishy about it?

Never mind,
I guest you had the 'regular' Oster-Selbach rather than the one with the 'fish label'.
My bad.

Hi R&B. Yep, looks like we had the regular S-O (see the picture). I have never seen the fish label - the website: http://www.selbach-oster.de/sb.htm doesn't seem to helpful.
Hi Marcus, it was awesome! We will do some damage like this someday...